Back in 2016, with few days of leave left and a pending Adventure List goal of ticking off a new destination, I decided to visit Berlin.

I’d never been to Germany and the history and culture seemed enigmatic to me. Germany has a reputation of being stoic, intimidating and historically loaded. Berlin, by contrast, is renowned for being a happy, crazy, tolerant place. The first seed that germinated the concept of a trip to Germany in my mind was watching Travel Man: 48 Hours in Berlin with Richard Ayoade.

My goal was to spend less than £100 on flights and less than £50 on a room. Then I would just need to factor in spending money but I’d heard Berlin was a cheap city (or at least, as cheap as you wanted it to be).

I booked my flight with Norwegian Airlines for £86.60 and stayed at Hostelo Berlin Mitte (pronounced Mitt-er). I nabbed myself a morning flight so I was up and out by 3am and arrived at my hostel at around 11am. Check in was not until 2 o’clock so I left my luggage in the secure storage room and went exploring. 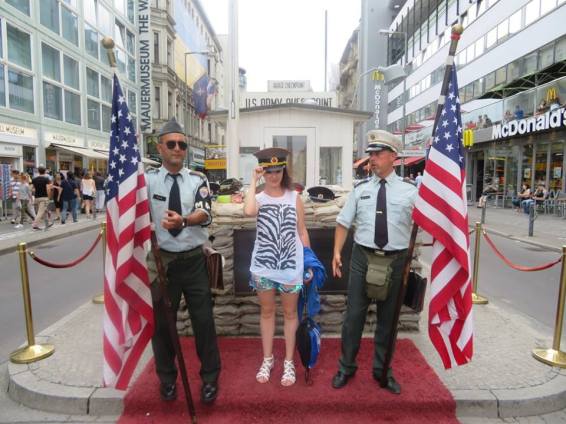 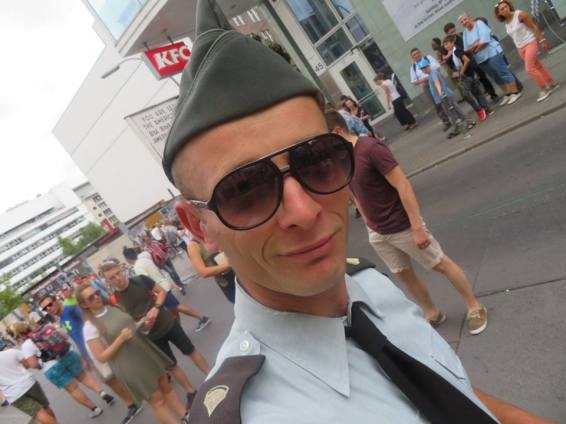 The weather was glorious. German weather, very much like English weather can be rather hit and miss. Fortunately, my first day was spent exploring the city in blissful sunshine. The German transport system is easy to navigate for the most part and despite my years of seasoned travelling, I still have a poor sense of direction. Even I managed to survive the journey so it can’t have been too bad. Fortunately, German people as a rule have excellent English (much like the Dutch) so if you do get lost, there is always someone who can direct you to the right place.

The cheapest way to travel from the airport is to purchase an ABC pass (I bought mine from an information desk rather than from the ticket machine because the queues for the machine were horrendous) and head to platform 6 for the RB14 train. Get off at Friedrichstr, which is connected to everywhere and everything. If you’re heading to Hostelo Berlin Mitte, jump on the S1, S2 or S25 and get off at Gesundbrunnen. The hostel is to the right of the station literally minutes away and perfectly placed for a quick escape. Two nights in a mixed dorm set me back $42 and my companions were lovely.

Part of what I enjoy so much about the travel experience is the roomies. It’s always a mini UN and this time, I was bunking with a Spaniard, an Aussie, two Germans and a fellow Brit.

So anyway…back to my exploring. I headed to Alexanderplatz which is a hive of tourist activity. It’s the sight of the TV tower (you can eat dinner at the top and enjoy the supposedly German décor) and endless fountains. This is the perfect place for a tourist photo.

I headed to the bridge where I made a friend, a fellow traveller from the Ukraine, and we stopped and ate dinner in full view of the striking architecture. This area is a bit of a tourist trap but the prices are not as astronomical as London and sometimes it’s nice to have a treat. I also got to taste a traditional German beer mixed with either raspberries or syrup known as a Berliner Weisse. For someone with as strong a sweet tooth as me, this was the perfect drink. 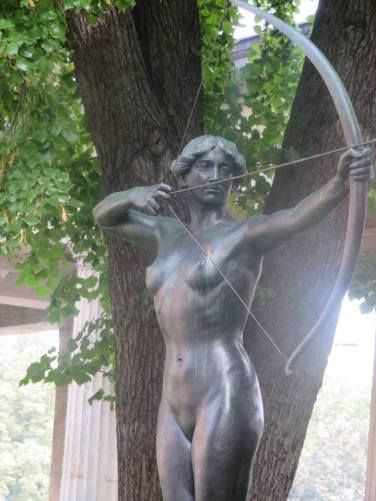 We then headed to Unter den Linden (under the Linden, or lime, trees) and to the Brandenburg Gate. Hotel Adlon is the famous hotel where Michael Jackson dangled baby Blanket from the balcony in front of the braying media. Here, we bumped into an American journalist from Silicon Valley and he and I went on a boat tour of Berlin in the sun shine. We got on at Alexanderplatz but boat tours litter the city and it’s a great way to take in the totality of Berlin and to get a snapshot of what each area has to offer.  Hackescher Market, for instance is known for its cool, throbbing, utterly German vibe. We sailed past revellers on sunbeds listening to trance music and young couples kissing in front of green trees. You can order beer on the boat as well (you can pretty much drink anything anywhere in Berlin). I knew we were having fun when the pair of us were told to shut up by the Italians sharing the boat with us.

After a day of clocking up 27,354 steps, my American friend and I headed to dinner at ‘Sud’, a restaurant in an arty district of the city that has undergone much change. The artists’ colony has been torn down but the area still feels like a hub of action. 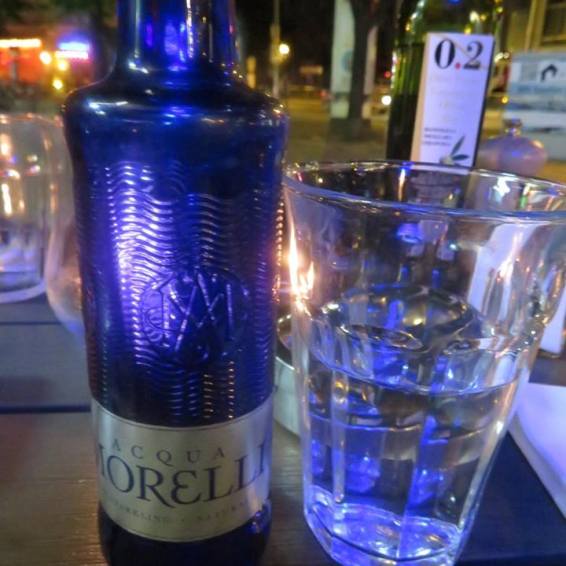 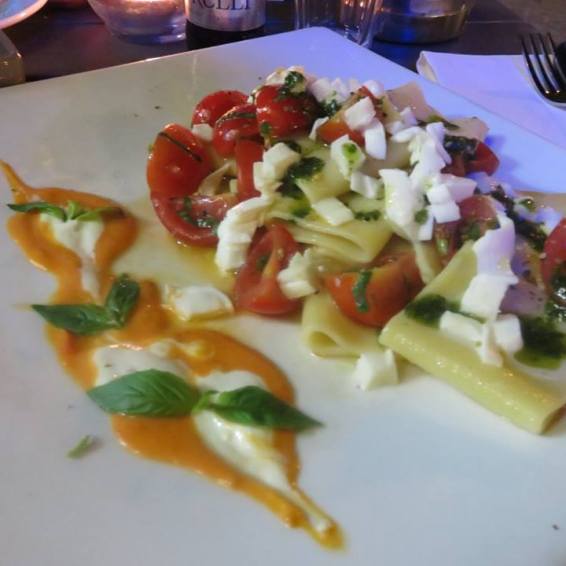 The following day I embarked on a walking tour. My guide Torbin, a dead ringer for Matt Damon, took us on an extensive 4-and-a-half-hour tour of the central sights of Berlin including the Brandenburg Gate, the sight of Hitler’s bunker (sight is not an appropriate word, the bunker is unmarked so that the area does not become a shrine to Hitler’s ideology), Museum Island, the Memorial to the Murdered Jews of Europe (stark and haunting), the Berlin wall and Checkpoint Charlie (stunning location but surly guards.)

After the culmination of the walking tour I went for further exploration and got a little lost before heading to Vapiano with my roomie and treating myself to delicious Italian food. That night, we headed back to the hostel and drank and chatted.

The following day we headed to the Sachsenhausen Concentration Camp located in Oranienburg. I had always wanted to visit a camp as they played such a pivotal role in history. Maybe that sounds morbid but history only comes alive when you get to interact with the remnants left behind.

I’ve watched documentaries, listened to testimonies and read The Diary of Anne Frank but the experience of seeing a camp was wildly different than anything I could have expected. The experience was humbling, emotional and informative. Entrance is free and you pay $3 to rent a portable audio tour (you input the number and listen to the information for each area dotted on the map). You can also book onto a guided tour of the grounds but it’s better to explore freely in my opinion. There is also a striking memorial elected here that dominates the skyline and was rather imposing.

The grounds were green as we were at the height of summer and it was strange to feel that this area was beautiful despite the horror of what went on between its walls. Certain sights bought the horror home; crumpled shoes, photographs of inmates of the camp as they entered and left, the alteration in their features and especially their eyes harrowing to see, and small cramped cells where people held onto whatever hope they had left.

As you enter the camp, the words ‘ARBEIT MACHT ERE’ (‘work will set you free’) are boldly displayed on the gates.  The cruel irony of these words sets the tone of the camp. The centre is spacious and almost feels like it goes on forever but the wicked barbed wire fences would have reminded those inside that escape was an implausible fancy.

I left the camp feeling like I was coming up for air. The gratitude I felt for my life of freedom had never been stronger.

Finally, we headed to Mauer Park in Mitte and let’s just say this place was kicking. Dotted with market stalls selling jewellery, food and bomber jackets, this place was heaving with locals and tourists and the atmosphere was electric. If I lived in Berlin, this would be a place that I would return to time and time again. Maybe a Sunday pilgrimage.

Finally, I had a few beers with my companions before heading off to the airport. The trains were, uncharacteristically for the Germans, less efficient, so I jumped in a taxi with two people I met at the station (you really do meet people absolutely everywhere when you travel).

What can I say about Berlin?

Berlin is an intriguing place that wears its heart on its sleeve; it’s cool, young, fun and yet you can feel and see it’s history all around you. There are dishevelled remnants of the war days, sections of the Berlin wall still standing and foreboding gothic buildings that hark back to Hitler’s reign.

The Berlin of today is a very different city that opens its arms wide to explorers and is well worth a visit.

Traveller - Writer - Gemini I'm Kayleigh, I live in Kent and I'm 29 years old! For as long as I can remember, I've fancied myself as a mixture of James Bond, Xena Warrior Princess, Indiana Jones and Lara Croft! I've had the travel bug since childhood but as an adult, it's become a full-blown addiction. As we all have, I've lost time to my own laziness and malaise as well as to necessary day-to-day responsibilities. Feeling restless and painfully aware that I didn't always utilise my time, I came up with the concept of the 'Adventure List.' It's like a bucket list but less morbid. I decided that I would write down EVERYTHING that I had ever wanted to do and aim to tick off at least one item from the list per month. Naturally, it's not always possible to disappear to Africa for a Safari on a whim or to jump in a car and travel America by road just like that, so I decided to include minor goals and dreams too, like a pole fitness class or learning to make my own pizza. The 'Adventure List' keeps me focused on what I believe is the most important thing in life: Happiness, adventure, fulfilling your potential and chasing after your dreams. As children our dreams are at the forefront of our minds. As adults, they start to become murky and disappear. I hope that I can inspire my readers to pursue their own adventures and perhaps even assist if you find that your adventures and dreams are similar to my own! I've explored 32 countries including Thailand, Italy, Indonesia, America and Mexico and I aim to see many more! Join me as I complete my Adventure List and be sure to create one of your own! All my love Kayleigh View all posts by Adventure List K