Despite my passion for travel (and the countries near proximity), I had never been to mainland Spain. As a kid, I went to Majorca, Manorca and I’ve been to Tenerife (twice) but never the homeland itself. As part of my Adventure List project, I’ve been making a note of anywhere and everywhere that I want to go and Barcelona, as is so often the case with me, just catapulted itself into my mind.

The city looked fresh, modern and vibrant in photos and there’s an allure to Spain; it’s a fast-talking, high energy, sultry sort of a country, at least it was in my imagination.

I packed my bag, (1 airplane bag so there was no need to stick around at airports), booked a half-day at work and boarded the Gatwick Express train to the airport. The flight was delightfully brief (less than 2 hours) and made a change from my NZ jaunts where I was sitting on airplanes for what felt like (and usually was) days at a time.

I stayed at the Generator Hostel. Apparently, there are a few of them around, including in London and Rome. Although staying in a hotel is luxurious and affords you privacy, for a short, spend-thrift jaunt, a hostel is ideal. You get to mix with a lot of different people and it always has a way of making me feel like I’m a teenager again. There’s an energy and a buzz to dorms that doesn’t suit everyone but sometimes adds to the excitement of travel for me.

I was lucky that my dorm mates were great. In fact, they usually are in my experience. My only negative experiences when it comes to roomies was boarding with two girls in Queenstown, New Zealand who looked (and behaved) like the twins from The Shining as well as sharing a room (albeit briefly) with a man whose arm was cut into ribbons and who ended up stealing my friends tablet (also in New Zealand…no reflection on the country) but these are probably stories for another blog…‘Hostel Mates from Hell’ perhaps. 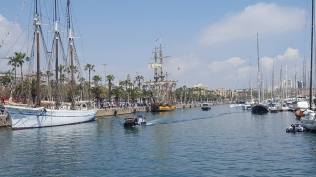 This time, my room buddies included an Argentinian with much ‘charmuccio’ (translation: game with the ladies), a Parisian with a flair for cigarettes and coffee for breakfast (so very French), two lovely French men who felt like cartoon characters come to life and who charmingly read Tin Tin comics, a Brazilian who watched too much TV, another Argentinian who never saw the light of day and an Egyptian with a Paris fetish.

I only had 4 days in the city and my French friend became my companion for much of the trip. We were pretty much inseparable and took on the city together. She had been to Barcelona several times so she was a great tour guide and knew her way around the city well and most certainly better than I ever could have if I’d have been alone.

Here’s what we got up to:

Taking a tour of the city by bus

I love to walk a city. I normally rack up well over 10,000 steps a day and retreat to my room with exhausted legs and a temporarily flat tummy. This time, I thought I’d take in the city by bus. When you have a poor sense of direction, as I do, a bus tour is useful as it drives you directly to the best spots in the city and as long as you can find the bus stop, it doesn’t require much self-direction. I hopped aboard with Big Bus Tours for a day tour around the city which looked stunning in the sunlight.

One thing you’ll notice about Barcelona is it’s striking architecture. It’s a little quirky and very romantic. Gaudi was a famous architect from Barcelona with a flair for the interesting and iconic. The city is peppered with Gaudi’s pet projects including La Pedrera, with its undulating stonework and La Sagrada Familia itself. You will notice his work instantly despite the fact that each building has it’s own quirky style. It gives Barcelona a very distinctive feel.

This building is in a state of flux right now and although it’s being worked on, it’s still beautiful. A striking place of worship, five generations have already witnessed the construction of la sagrada familia and it remains unfinished. I was informed that the build would be completed by 2019 but I imagine it will take longer! Individual tickets to enter cost 24 euros and up. 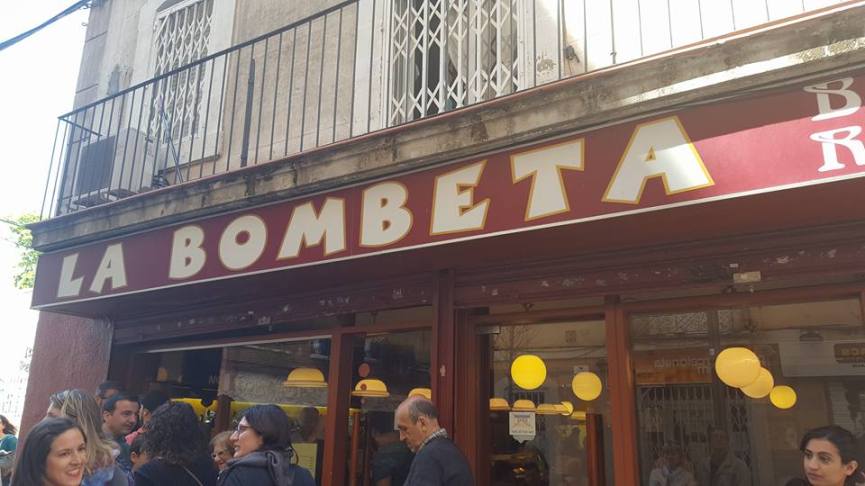 My French friend had recently been to Barcelona with family and she was dying to share with me a local delicacy that I had never tried before, patatas bravas (basically potatoes in a spicy tomato and aioli sauce). We wound our way around Barcelona, off the beaten track, to find a place heaving with locals (and a few brave tourists). The menu was only in Spanish but fortunately my friend could speak it and there is usually a way to muddle along with waiters. Let me tell you, this dish is delicious. It’s very rich and a perfect combination of fiery, creamy and sweet. It’s filling and indulgent – a decadent carby Spanish treat.

We are a nation of people who like to look at pictures of what other people are eating. With that in mind, here’s a selection of the eats available in Barcelona. You will notice copious amounts of patatas bravas. 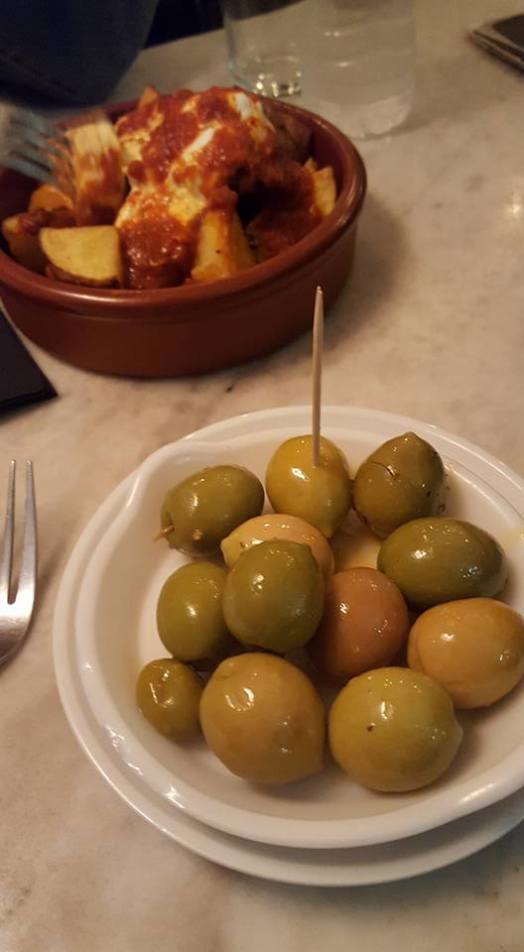 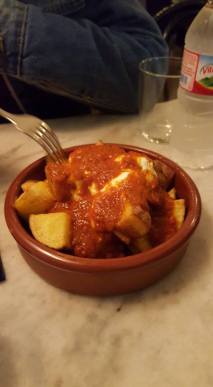 And here’s a picture of me with a beer, just because: 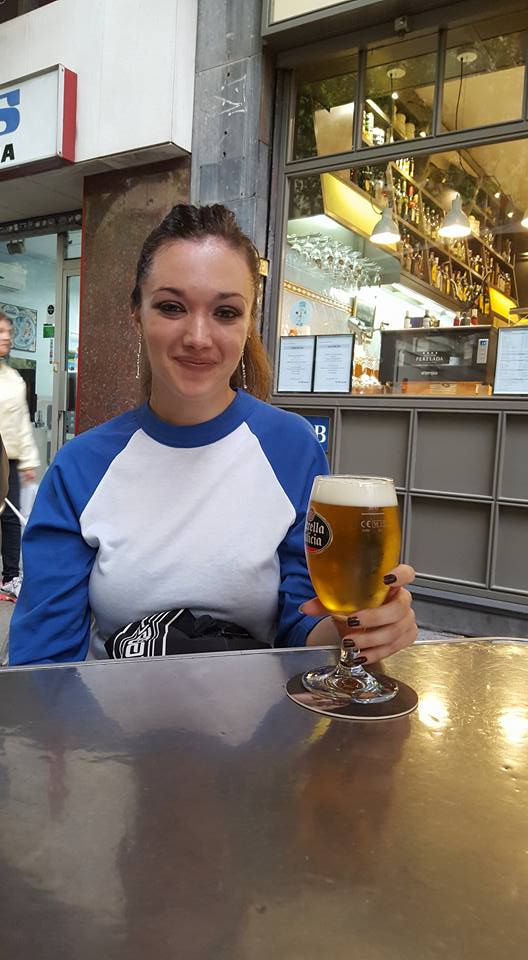 Barcelona’s main beach is not the most stunning but it ticks all boxes and besides, it’s so wonderful to have that city/beach combination. Barcelona is a bit like Brighton (but obviously better). As with any beachside town, the people are laid-back and carefree and there’s a lovely sense of looseness that makes time glide by like silk. At the beach, you’ll find all of the usual fun; beach side activities like volleyball, artwork and delicious restaurants that serve up Spanish delicacies as well as carefree bars. 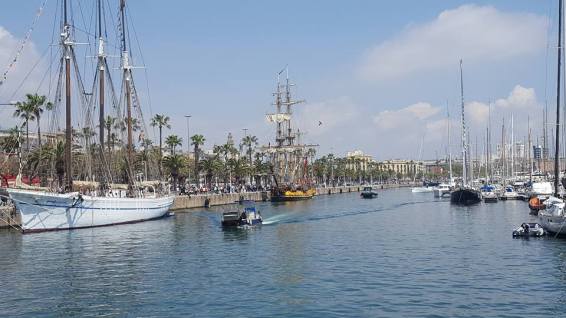 Whenever you let on at work that you’re going away, there’s an avalanche of recommendations. My friend suggested a place called Les Boccas de Les Fades, a ‘forest bar’ set not far from Las Ramblas, Barcelona’s main street. Finding this elusive spot proved difficult. It was like finding the entrance to a secret society. Once inside, I ordered a beer and a ham baguette which at home would have felt like a dreary choice, but the quality of the ham and bread was to die for! Have you guys ever seen the film Legend? That’s what Les Boccas de les fades reminds me off. There’s a fairy garden, wishing well and even seasons, as the ceiling transforms into stormy skies on a whim. I could have spent all day and night here and it’s easy to loose track of what’s going on back in Barcelona. 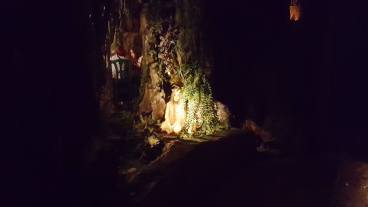 This delicious little bakery is located just off Las Ramblas. We came here every morning for a coffee and a cake. 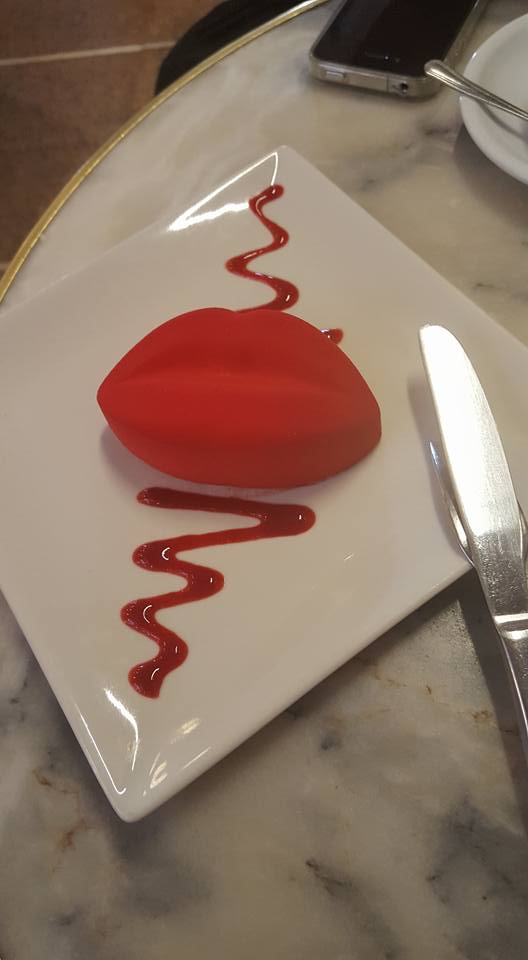 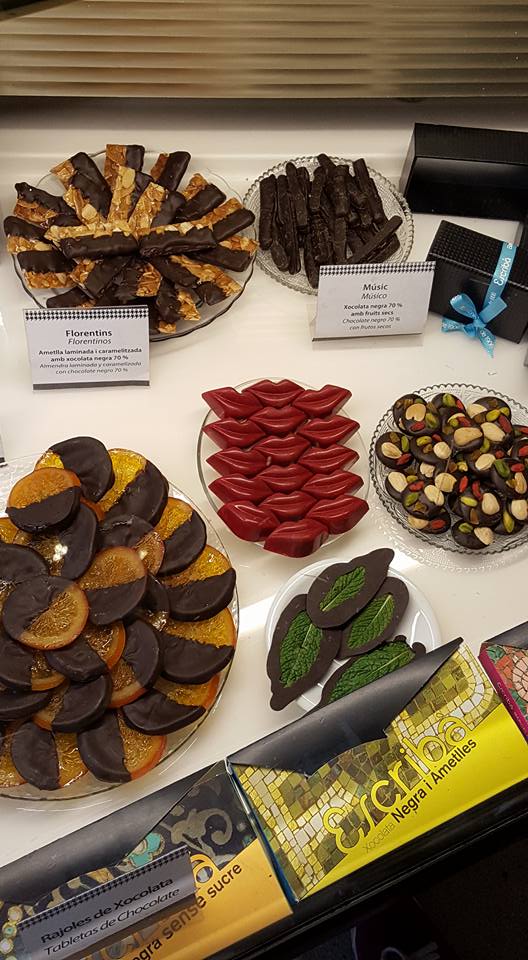 Quite wonderfully, and unbeknownst to me, I was in Barcelona on Sant Jordi day. On this day, men give women flowers and women give men books as romantic tokens. The streets are full of vendors flogging one or the other and it lends the city a wonderful charm.

So, for architecture, beaches and food, Barcelona cannot be beaten. It’s a laidback but thriving place with its finger well and truly on the pulse. Now I just need to head to Madrid…